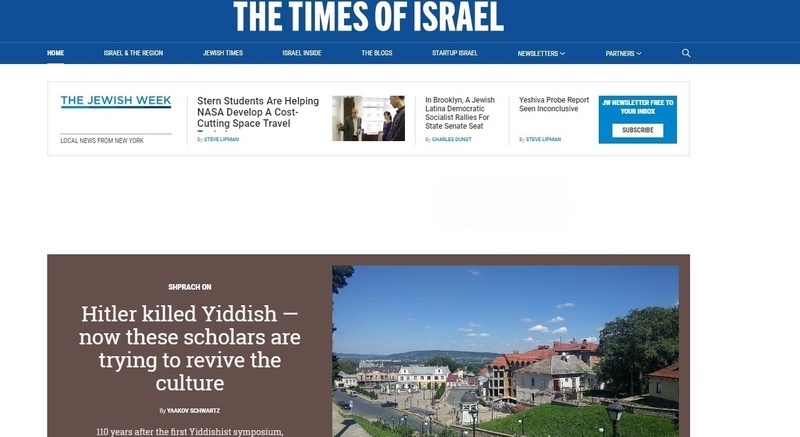 The leading online newspaper "The Times of Israel" has published a detailed, gorgeously illustrated report on the Czernowitz Yiddish conference, held by the International Yiddish Center at the World Jewish Congress and others in August 2018.

110 years after the first Yiddishist symposium, academics reconvene in Ukraine to preserve a language that saw half its native speakers die in the Holocaust

CHERNIVTSI, Ukraine – In the elegant, slightly faded lobby of the Hotel Bukovyna, a group of gray-haired, eccentrically-dressed academics sipped cognac and argued in Yiddish.

The collective represented just a handful of the over 100 scholars, enthusiasts, and Jewish community advocates from 12 countries around the world that assembled earlier this month for the International Commemorative Conference of Yiddish Culture and Language in western Ukraine.

Running from August 5 to 12, the conference was an homage to the first international Yiddish conference in Chernivtsi — known in Yiddish as Chernovitz — which took place 110 years ago almost to the day.

At the time, the 1908 symposium represented the Yiddishist movement's blissful optimism. Gathered together to transition the 1000-year-old language from a provincial dialect into a modern Jewish literary language, the enthusiasts at the first Yiddish conference had no way of knowing that just a few decades later, half the native speakers would die in the Holocaust. The subsequent rise of Hebrew as the universal Jewish language was a virtual nail in the coffin of the ancient tongue that was just hitting its stride. 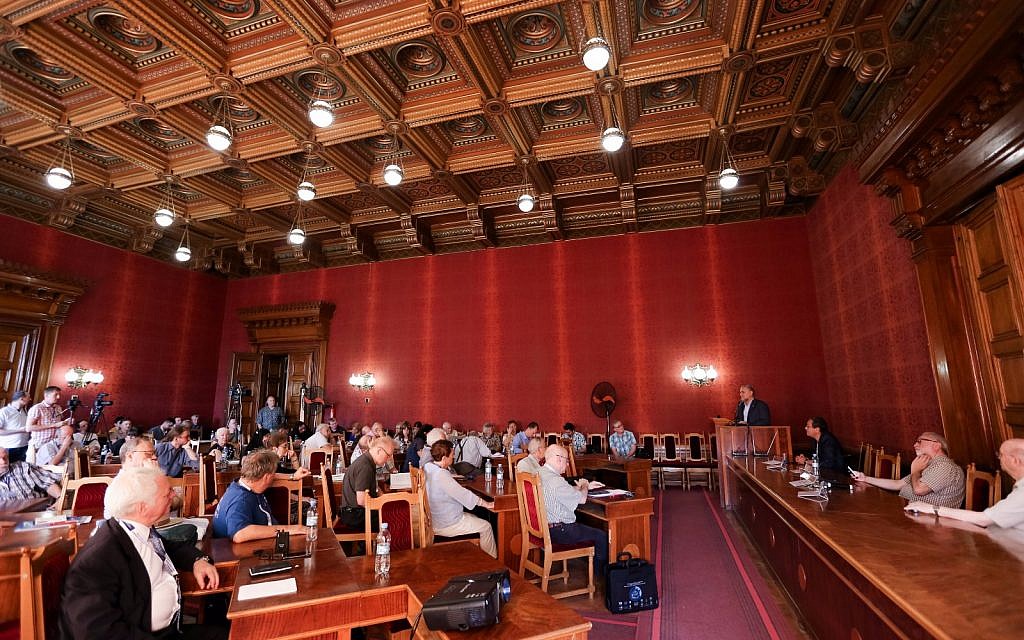 The International Commemorative Conference of Yiddish Culture and Language at the University of Chernivtsi, Ukraine, August 9, 2018. (Courtesy World Jewish Congress)

Today, Yiddish is labeled an endangered language. It is almost exclusively spoken by a small, cloistered group of ultra-Orthodox — mostly Hasidic — Jews.

This year's conference sought to nurture a small but budding Yiddish renaissance. There is a growing interest in the language from both Jews seeking a connection to their history, and non-Jews fascinated by the language's rich cultural heritage.

Mordehay Yushkovsky, academic director of the World Jewish Congress' (WJC) International Yiddish Center in Vilnius, Lithuania — one of the conference's co-sponsors alongside Ukrainian Jewish Encounter— told The Times of Israel that while his center doesn't seek to revive spoken and written Yiddish completely, there's still plenty to learn from the language.

"Our goal is to preserve Yiddish culture — literature, folklore, theater, cinema, humor — this is the core," Yushkovsky said. "Yiddish can be — and most often is — learned online these days. But we are looking to perpetuate the education of an entire cultural complex that was nearly destroyed in the Holocaust." 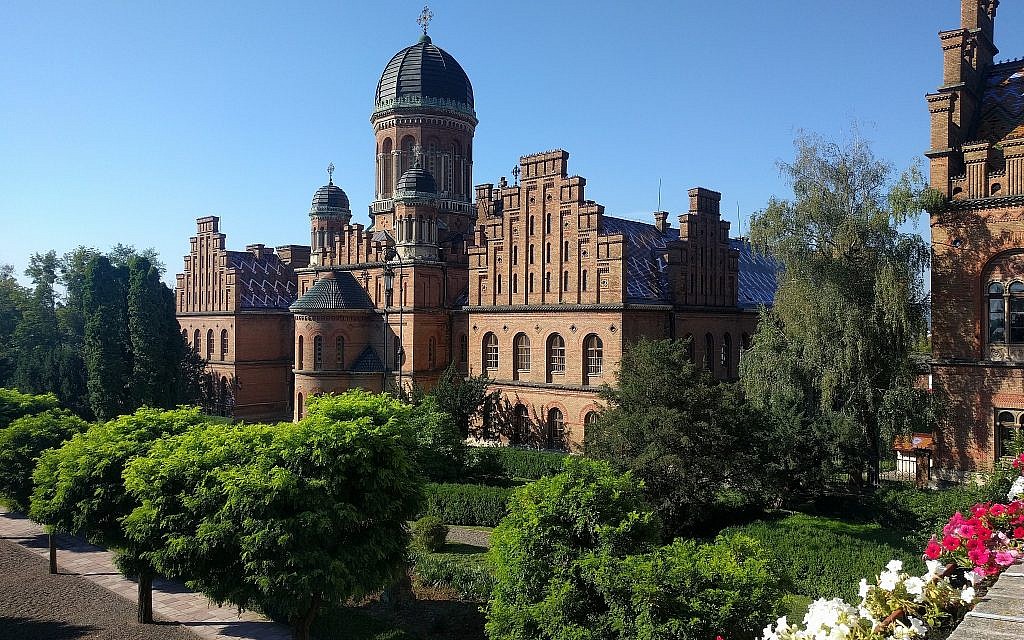 The University of Chernivtsi, Ukraine. (Yaakov Schwartz/ Times of Israel)

"If it weren't for the Holocaust, there would be 20 million people in the world speaking Yiddish today," Singer told The Times of Israel. "But as you can see, of all the Jewish community leaders here in Chernivtsi, only one speaks Yiddish. So I don't think we're going to see people on the streets of Chernivtsi once again speaking Yiddish. This isn't going to happen."

"But," he said, "for the future generation, to save a significant part of their culture that really disappeared after the Holocaust, it's extremely important. For our history, for our identity, and really, this city is unimaginable without its Jewish history. It's a part of the city's DNA."

Dr. Wolf Moskovich, a retired professor and chair of Russian and Slavic studies at the Hebrew University in Jerusalem, told The Times of Israel that the conference represented an opportunity to highlight the culture of harmony that prevailed in Chernivtsi before World War II. 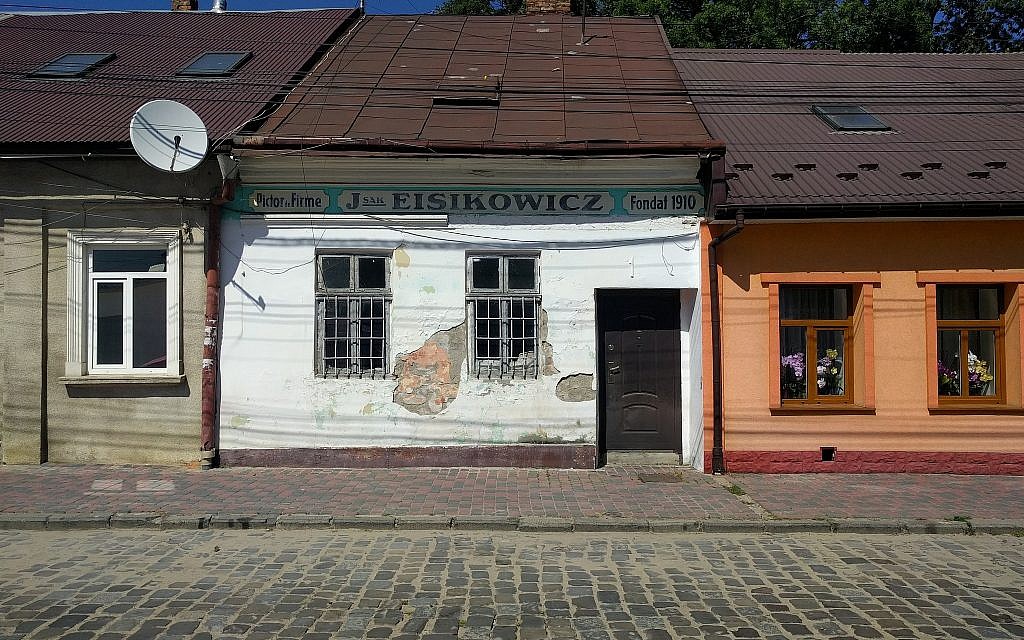 "Chernivtsi is the best example historically of understanding between Jews and Ukrainians. For example, the 1908 Yiddish conference wasn't supported by the local Jewish community here," Moskovich said.

"Benno Straucher, the head of the Jewish community, saw a political rival in the man behind the Yiddish convention, and he saw in Yiddishism a kind of revolutionary idea that was a challenge for the 'mainstream community,' so he didn't provide any venue for the conference. So the conference actually took place in the Ukrainian national house, because the Ukrainians were loyal to the Jews at that time," Moskovich said.

Moskovich is on the board of Ukrainian Jewish Encounter (UJE), which, according to its website, is "a privately organized, multinational initiative launched in 2008 as a collaborative project involving Ukrainians of Jewish and Christian heritages." Moskovich was a key speaker at this year's conference. 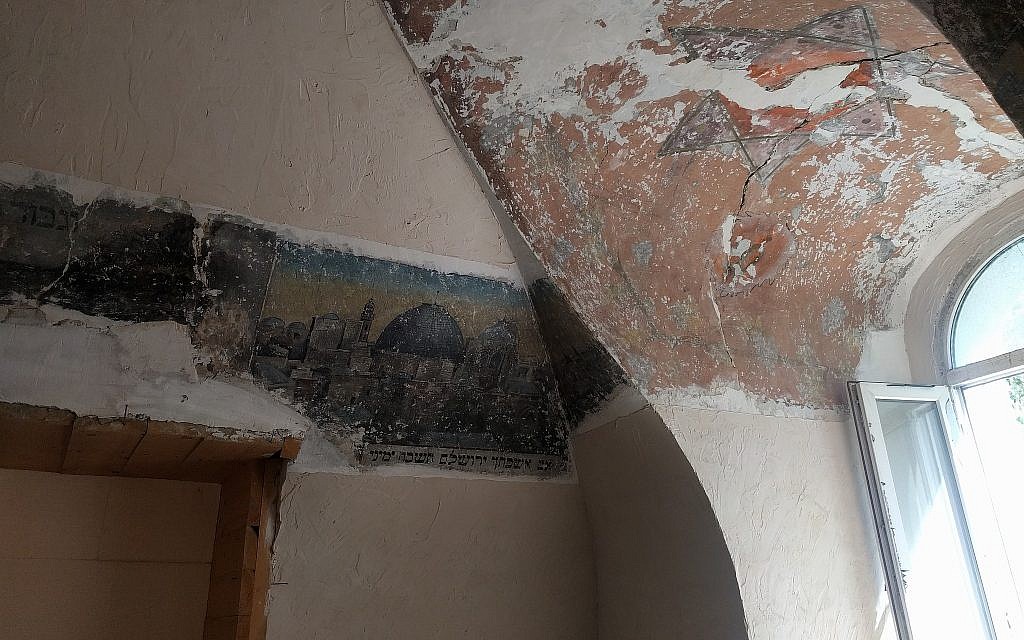 Frescoes remain preserved on the ceiling of a former synagogue that is now a woodworking shop in Chernivtsi, Ukraine. (Yaakov Schwartz/ Times of Israel)

Demise of a shtetl

Before two-thirds of Chernivtsi's 50,000-strong Jewish population were killed in the Holocaust, things were indeed good for local Jews.

Chernivtsi represented European Jewry's golden age and was the capital of Bukovina, a region created and named by the Austrian monarchy from its capture in 1775 through the kingdom's dissolution in 1919. One-third of the city's residents were Jewish, and the town, by some counts, housed 86 synagogues. Jewish shops lined the streets, and at one point in the early 20th century, 90 percent of the city's retail was owned by Jews. From among Chernivtsi's residents emerged numerous people of note — scholars, politicians, and writers such as Rose Auslander and Paul Celan.

Its prosperity and location in western Ukraine, which saw the launch of Hasidism, led Chernivtsi to become a center for the Hasidic movement as well as the secular Jewish enlightenment that attracted both Yiddishists and Hebrew-speaking Zionists. 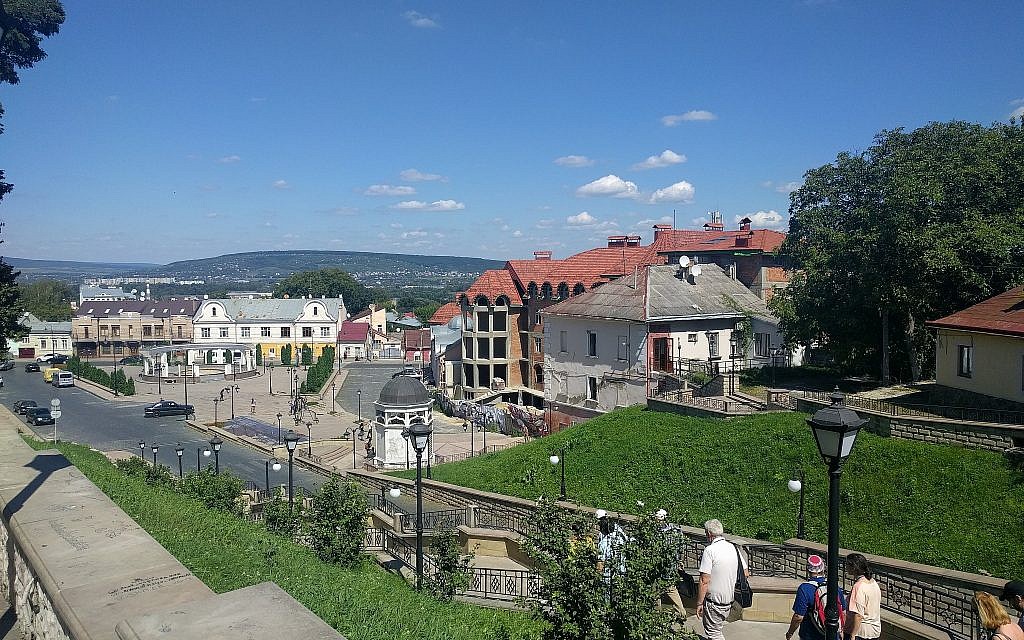 A view onto lower Chernivtsi, where the Jewish ghetto began in World War II. (Yaakov Schwartz/ Times of Israel)

But the occupation of Chernivtsi by Axis-aligned Romania in 1941 forced the ghettoization of the city's Jews under the orders of dictator Ion Antonescu. In late 1941 and early 1942, two-thirds of the Jews were deported to Transnistria; most died.

After the Red Army took the city in 1944, most of the city's surviving Jews slipped across the border into Romania, from where they emigrated to then-Palestine.

Josef Zissels, founder of the Vaad Association of Jewish Organizations and Communities of Ukraine — also one of the conference's co-sponsors — has been living in Chernivtsi for the last 40 years, after spending the first part of his life in Kiev. 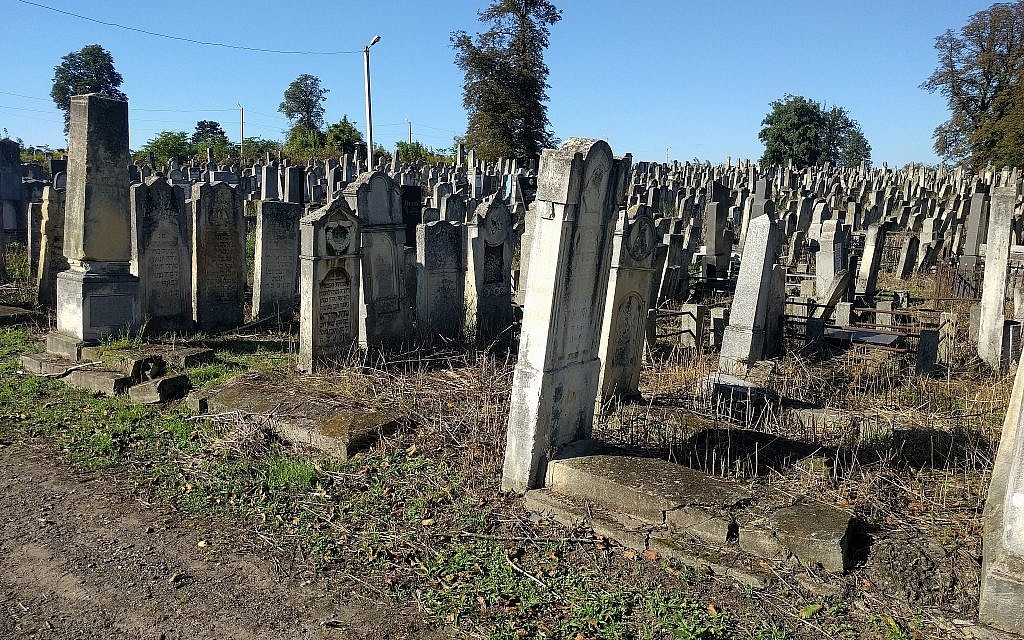 50,000 people are buried at the Jewish cemetery in Chernivtsi, Ukraine, founded in the mid-19th century. (Yaakov Schwartz/ Times of Israel)

Zissels told The Times of Israel that in the decades of Communist rule following WWII, the Jews that remained in Chernivtsi struggled to maintain their Jewish identity. Though Yiddish was still often spoken at home, its study was effectively outlawed.

"I had many friends, members of the intelligentsia, who had lived here before WWII," Zissels said. "They were teachers of Hebrew and Yiddish, who, during Soviet times, were afraid to speak about these things openly."

Zissels himself spent seven years in prison between 1977 and 1987 for his pro-Jewish, anti-Soviet dissident activities. 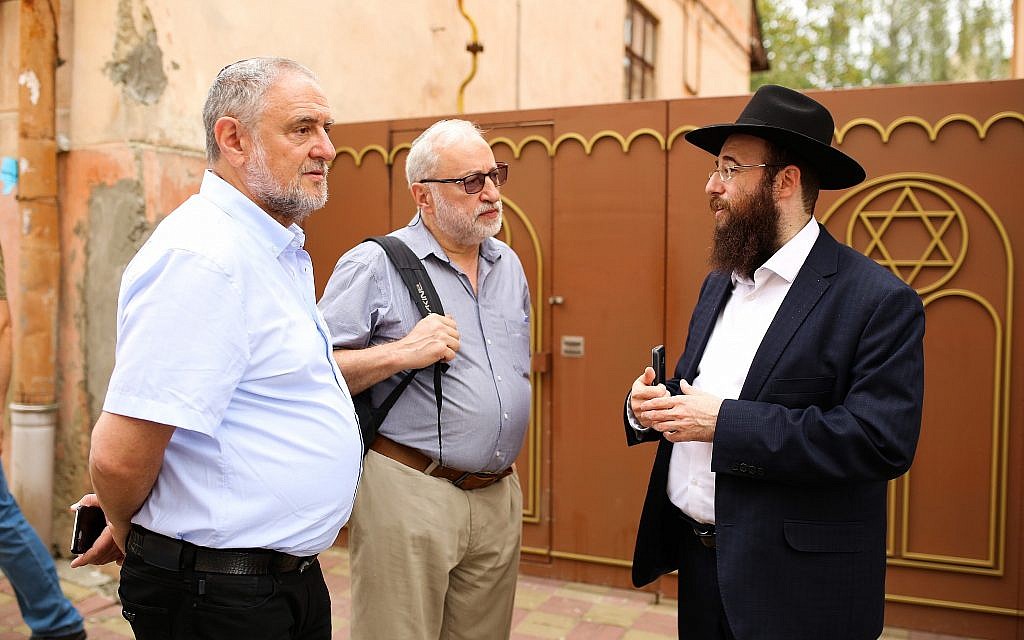 After being released from prison, he founded the Vaad with the goal of consolidating the Jewish presence across Ukraine and the former USSR, combating anti-Semitism, and providing social services to the local Jewish community.

Leading up to and following the fall of the Iron Curtain in 1991, many of Chernivtsi's remaining Jews continued to emigrate to Israel, something Zissels said the Vaad aided.

While the Jewish population is a fraction of what it once was, it boasts a relatively healthy microcosm of Jewish life. 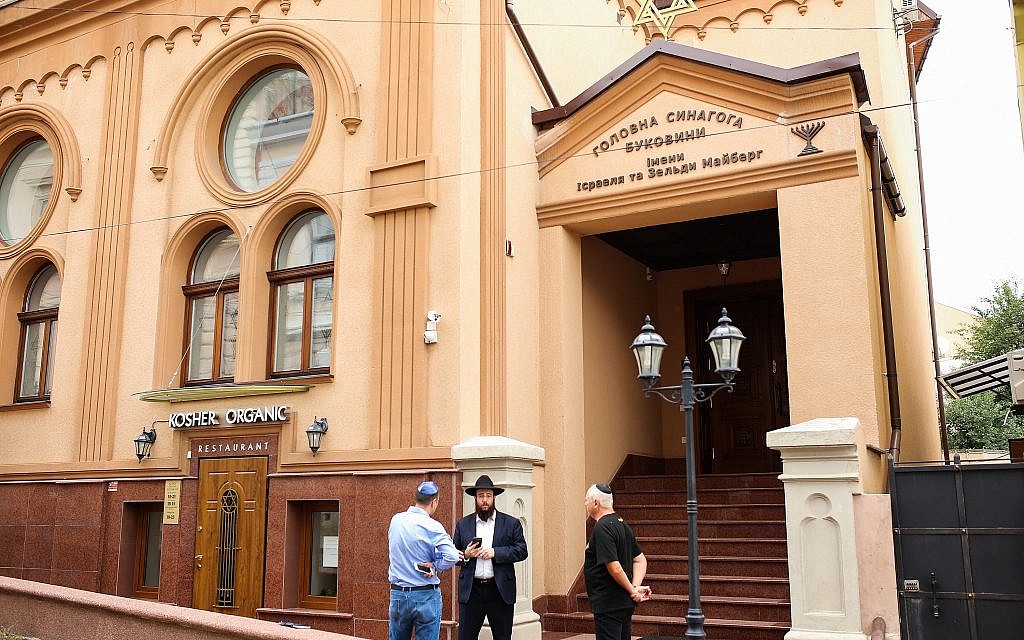 Aviv, a local Masorti synagogue, also offers classes and group activities for about 40 young adults, not far from a small museum of Bukovina's Jewish history, located in a magnificent building in the city's Theater Square. 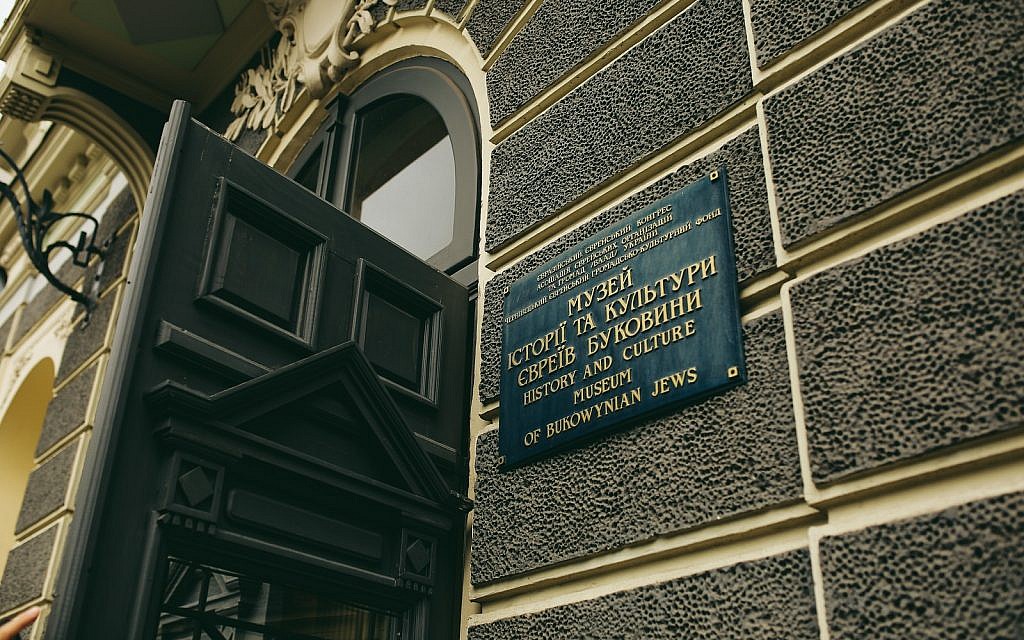 Straddling the River Prut, modern day Chernivtsi also includes the municipality of Sadigura, where Rabbi Avrohom Yaakov Friedman founded the Sadigurer Hasidic dynasty. A famed wonder-worker known for his opulence as much as his saintliness, Friedman built a magnificent palace and synagogue, from where he would receive both Jewish and non-Jewish visitors seeking his blessing and advice. 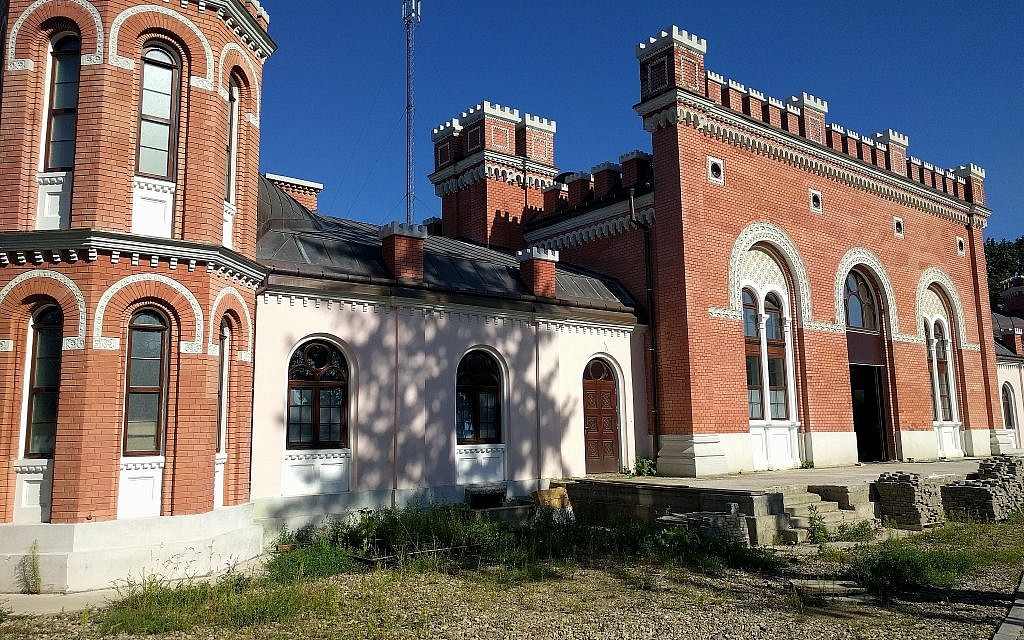 Glitzenstein has overseen the synagogue's recent renovation under the auspices of the Rohr family and the Sadigurer Hasidim in Israel. The site is a destination for visiting Hasidic pilgrims, who come to pray at the late rabbi's grave, located nearby.

While the small Jewish community generally enjoys a placid relationship with their Ukrainian neighbors, a rising nationalistic movement in western Ukraine has been cause for concern.

Standing in front of the Sadigurer synagogue speaking with a Hasidic tour group from New York City, this reporter saw a passing car slow down and a passenger yell an obscenity out the window toward the group. 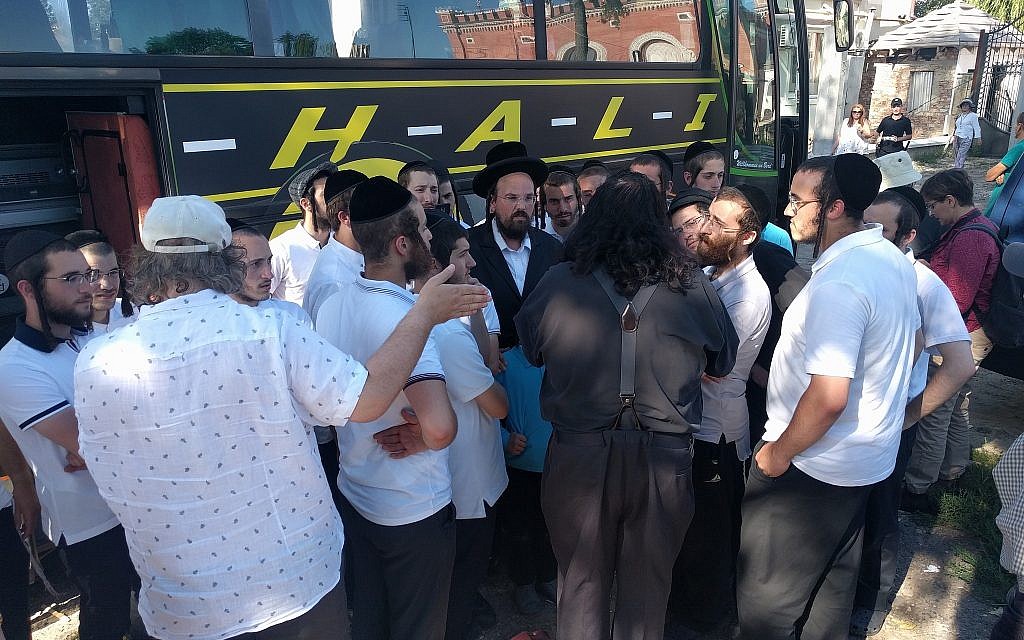 What's a conference without a controversy

In line with expectations for an academic symposium focused on the Yiddish language, the conference was at the center of political controversy.

Eduard Dolinsky, the director of the Ukrainian Jewish Committee, recently accused the Vaad of "whitewashing" the current climate of anti-Semitism in Ukraine. Dolinsky also slammed the WJC for partnering with the Vaad in sponsoring the conference.

Zissels, the Vaad's executive co-president, denied Dolinsky's claims in an interview with JTA prior to the conference, calling them "lies and slander in order to diminish the [Vaad's] authority and influence." 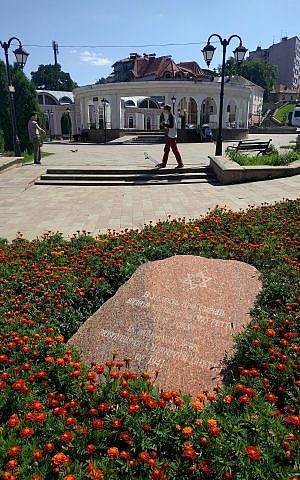 In May, 50 members of the United States Congress signed a letter decrying Ukraine's recent lionization of Nazi collaborators who fought the Soviets — such as Stepan Bandera, who in 2016 had a street named after him in Kiev. Zissels, meanwhile, played down the letter as Russian propaganda, prompting Dolinsky and the Ukrainian Jewish Committee to cut ties with the Vaad.

Though Zissels may not agree with Congress, there's no way around the fact that Chernivtsi has seen several cases of anti-Semitic graffiti of late. Community leaders, Zissels included, have been disappointed with the local government's lackluster response to the hate crimes.

"There are less cases of violence against Jewish people here than in many other places in the world, but there is an increasing nationalistic narrative that is trying to be developed here, and this is something that we're trying to deal with," Singer said.

Singer, back in his hometown for just the second time since his teens, voiced his concerns to Chernivtsi's interim mayor at an August 10 meeting at City Hall attended by Zissels, Glitzenstein, and several other community members. 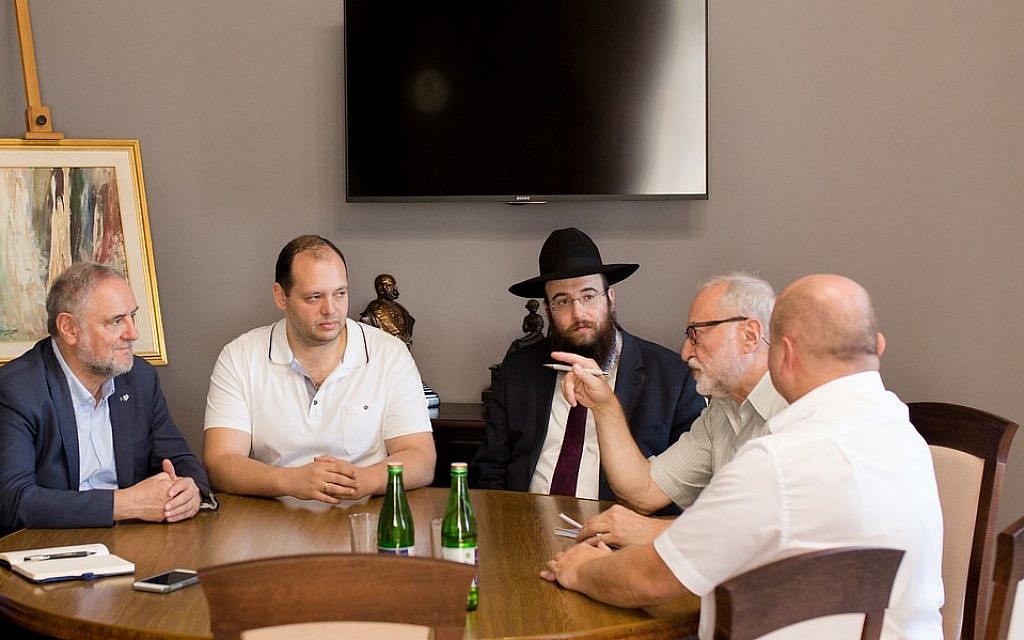 According to Singer, the WJC does "what different communities need us to do."

"If the challenge of this community is preserving the culture, or if the challenge is anti-Semitism, anti-Semitic graffiti, and non-action of the local authorities, then we'll try to help them with these issues," Singer said.