International seminar on Yiddish language and culture from Fundación IWO 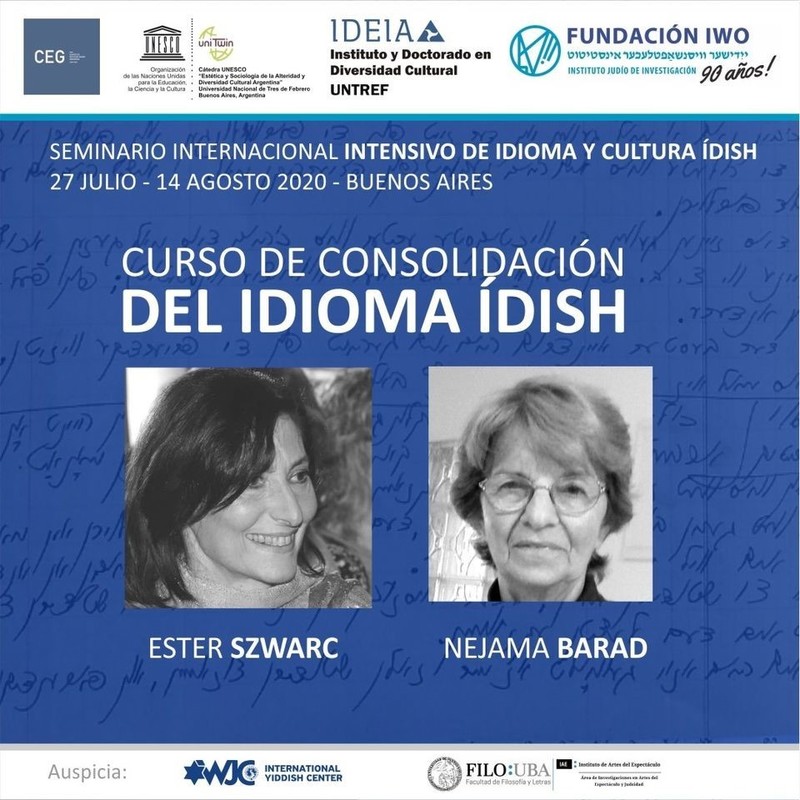 From July 27th through August 14th 2020, an international seminar on Yiddish language and culture was held by Fundación IWO and Universidad Nacional de Tres de Febrero in Buenos Aires.

The Yiddish language program offered opportunities to learn Yiddish and explore the roots of Jewish culture; to create social and academic ties with speakers of Yiddish and other languages; to explore unique cultural forms of the region such as Yiddish tango, Latin American Klezmer music, Jewish gaucho culture; and documentary resources available for research in archives, libraries and collections on Jewish life in Argentina and the region.

The seminar fully met its goals in promoting awareness of the universal values of Yiddish language and culture among academic students and providing them with meaningful opportunities to engage in research on Jewish, Holocaust and Yiddish studies. It also offered Jewish participants the opportunity of dealing with own identities in a positive Academic environment.

Fundación IWO provided 50 partial and full scholarships. The evaluation of the activity by the students was highly positive. They expressed gratitude and interest in participating in a second edition of such seminar next year.

Intensive Basic Course of Yiddish (teachers: Lucas Fiszman and Sergio Lerer) for students who intend to start their knowledge of the language. It focused on learning grammar and vocabulary that allow to build a simple conversation on everyday topics.

Yiddish Language Consolidation Course (teachers: Ester Szwarc and Nejama Barad) for students who intend to deepen their knowledge of the language, including introduction to modern Yiddish literature through short texts and conversations about Jewish traditions, sayings, and songs.

Yiddish Literature: Country and City in Argentine Yiddish Literature (teacher: Abraham Lichtenbaum).At the end of the 19th century, thousands of Russian Jews come to the countryside and the city in search for peace, work and freedom. We explored iconic texts by local writers and journalists who described the hardships and joys of early immigration in Argentina.

Holocaust literature: Yiddish and the Writings of Annihilation (Dr. Perla Sneh – UNTREF). The absence of Yiddish in most academic studies of extermination has caused significant distortions in their approaches. We studied texts written in Yiddish during and after the Shoah - as literary access to a perspective that questions established stereotypes such as Jewish non-resistance or the supposed silence of the survivors.

Cinema in Yiddish. Stories, images and dreams (Dr. Lior Zylberman – UNTREF). The seminar aimed at reviewing the history and characteristics of Yiddish cinema as a source for understanding Yiddish culture from the beginning of the 20th century to the 1950s, focusing on various poles of production and recurring themes and images.

Yiddish between the lines (MEd. MID Silvia Hansman – IWO). Through the analysis of historical documents, photograpy with dedications, theater posters, book covers, advertisements and newspaper clippings, we engaged with different aspects of the history of Yiddish writing in Argentine.

EXTRACURRICULAR WORKSHOPS were open to the public and were broadcast live on Facebook, such as the Workshop on Yiddish music in Latin America "LOS RUMBOS DE LA CANCIÓN ÍDISH EN AMÉRICA LATINA".

Oscar Hansman, president of the board representing IWO, opened the event by greeting the public, teacher and students. He stated the mission of Fundación IWO and traced its relations to the history of IWO in Vilna. He highlighted IWO determination in keeping its activities in such difficult times as the pandemic. In representation of WJC Ms. Veronica Matchey explained the role and mission WJC in Latin America and its interest in strengthening ties with universities. In the closing remarks, Professor Abraham Lichtenbaum thanked the Yiddish Center for supporting this program and for recognizing the importance of encouraging Jewish life and helping to provide opportunities for participation for academic students in South America.