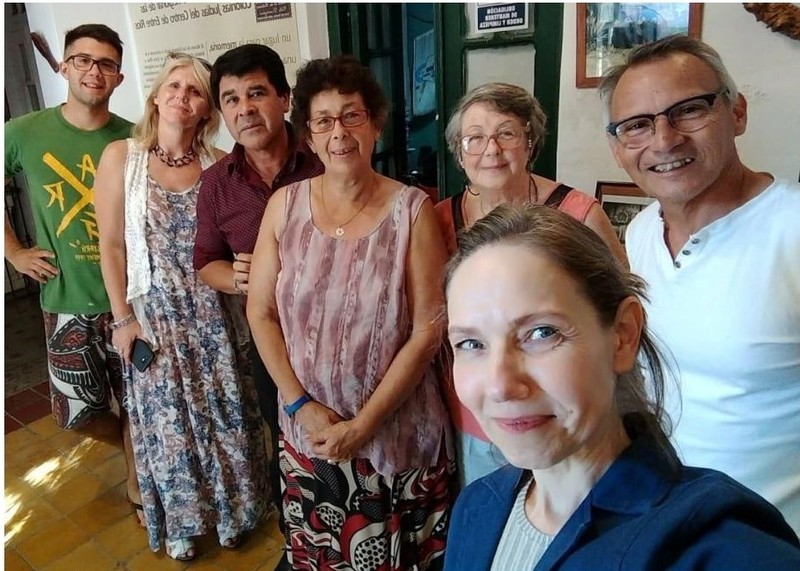 The seminar "Working, eating, speaking Yiddish and multilingualism" was held on December 18-19th, 2019 in the Museum and Regional Archive of the Jewish Colonies, located in a rural town of Villa Dominguez, Bergara District, Villaguay Department, Entre Rios Province, 700 km northwards from Buenos Aires.

The meeting was organized by the Argentinian Fundación IWO in cooperation with the the International Yiddish Center at the World Jewish Congress It.gathered representatives of urban and rural areas, from different communities of Yiddish, Spanish, German, Russian and other languages' speakers. Some 20 people participated actively in the workshops.

The opening speech was given by Director of the Museum, Mr. Osvaldo Quiroga, who welcomed the IWO team and thanked the Yiddish Center for its support.

Osvaldo greeted the participants and the recently elected authorities. He talked about the different groups of immigrants who have made the province of Entre Rios one of the most multicultural and multilingual areas in the country. He described the documentary and literary Yiddish treasures that are held in the Museum (created in 1985) explaining how donations were made over the years by various descendants of Yiddish-speaking settlers in that region. The materials, documents rescued from disappeared Yíddish schools and libraries, are the memories of the organizations which have shaped the network of the rural colonies.

The first talk by Director of Fundación IWO, Professor Abraham Lichtenbaum, "The Introduction to Yiddish language" focused on the importance of Yiddish in the Ashkenazi culture and its contribution to the Argentinian culture.

Professor Lichtenbaum also emphasized the role of IWO in preserving and communicating Jewish and Yiddish culture, presented an overview of the history of IWO since its creation in Vilna (now Vilnius) in 1925, and thanked WJC YC for supporting this IWO program and for recognizing the importance of encouraging Jewish communities which are far from the centers. Marcos Berenstein, the Judge of the Peace in Dominguez, greeted that initiative.

In the following morning, IWO offered a series of workshops to enhance the knowledge of Yiddish language among the participants:

After the lunch break, the closing speech was given by Abraham Lichtenbaum with a Yiddish song performance by Roni Goldberg. The evaluation of the activities by the participants was highly positive. During the closing session both the participants and the authorities expressed their interest in hosting a new Regional IWO seminar next year.

Marisa Obholz, Head of Tourism of Dominguez, expressed her will to host such an inspiring seminar. Juan Romero, Mayor of Dominguez, showed his willingness to give the workshop next year an official recognition and offer the participants certified accreditation by the Ministry of Culture in order to attract the involvement of teachers and students from the region.

The whole session met its goals in promoting awareness of Yiddish language and culture values among a diverse audience. This was the first ever Yiddish-featuring public event in the above-mentioned locality.